I thought I’d share my “oops” cake with you. As you may remember, I made Chocolate Soufles the weekend before Valentines Day since it fell on a Monday this year. While I was out for a run on the afternoon of Valentines Day, I was thinking about cake. Yes, I think about food constantly while I run. After all, I run so I can eat more. Oh, and yeah, that being “running is good for me” stuff too. Anyhow, I thought my dear hubby would really appreciate a red velvet cake on V-day. It is his favorite and I figured I probably had time to make a small cake and surprise him. There would be no time for fancy stuff, just a cake. I used the same recipe from Smitten Kitchen but cut the cake recipe in half for a six inch cake and used the full icing recipe.

This is what happened: 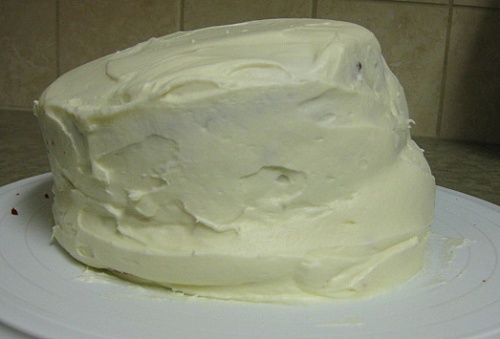 I took a teeny tiny short cut. Some of the cake stuck to the pan and instead of patching it up or at least trimming the cake, I just tried to fill it in with more icing. And the cake started leaning! I tried to get it to stay upright but it was too late at that point.  It’s pretty funny, don’t you think? Thank goodness it was just for the two of us, and even more thankfully, it was DELICIOUS. My best tasting red velvet yet, I kid you not! It was so incredibly moist and yummy, I’m actually sad right now that it is long gone.

But this was a good lesson for me. One, minor patches on cake are a good thing, time permitting. And two, a less than perfect appearance does not mean less than perfect taste. Apparently I don’t always have to be a perfectionist to make good food. Lesson learned.