We’ve made it to the home stretch! Can you believe Christmas is less than a week away? This time of year always flies by. I’m almost done with my holiday shopping, just have a few last minute items to pick up and the last of my mailings went out today. Now it is time to just kick back and relax a bit!

Gingersnaps are probably one of the most recognized holiday cookies. I’d always preferred sugar cookies over ginger cookies but I may have been persuaded with this recipe. The perfect amount of fresh ginger, chewy (not a fan of crunchy), and well, I think they look pretty. I think Santa agrees!

This recipe came from Alton Brown, Good Eats 3. It’s a really amazing book and would make a great gift for a foodie. And Amazon is selling it at half the price I paid for it. We were lucky enough to meet Alton at one of his book signings this past fall, but you had to buy the book from the store to get a ticket. Which of course meant buying it at full price. It’s a steal at $18! I also got the Sugarplums recipe out of this book. And the marshmallows. Can’t say I don’t use my cookbooks, right?

These cookies are easy, which is how Cookies for Santa should be. You don’t want the added stress of complicated cookies this time of year. Chopping the ginger was the most time consuming part. I omitted the candied ginger because I knew that would be too much ginger for my taste buds, but added extra fresh ginger, 4 tsp instead of 2 tsp.  And the fresh ginger makes a huge difference. Don’t omit that. It takes the cookie to a whole new level.

I used a tablespoon scoop and baked the cookies for 12 minutes to get them perfectly chewy. If you prefer a crisper cookie, just bake longer, about 15 minutes. Enjoy!

Note: I’ve provided conversions in case you don’t have a scale, but I can’t vouch for the accuracy.

2. In a medium mixing bowl whisk together the flour, baking soda, ginger, cardamom, clove and salt.

3. Place the brown sugar and butter into the bowl of a stand mixer fitted with the paddle attachment and beat on low speed until light and fluffy,3 minutes. Scrape the bowl. Add the molasses, egg and fresh ginger and beat on medium for 2 minutes. Add the crystallized ginger, if using, and using a rubber spatula, stir to combine. Add the dry ingredients to the wet and mix with paddle until well combined.

4. Using a 1 TB cookie scoop, drop the dough onto a parchment lined half sheet pan approximately 2-inches apart. Sprinkle with coarse sugar. Bake on the middle rack of the oven for 12 minutes for slightly chewy cookies or 15 minutes for more crisp cookies. Rotate the pan halfway through cooking.

5. Remove from the oven and allow the cookies to stay on the sheet pan for 30 seconds before transferring to a wire rack to cool completely. Repeat with all of the dough. Store in an airtight container for up 10 days (trust me, they won’t last that long!). If desired, you may scoop and freeze the cookie dough on a sheet pan and once frozen, place in a resealable bag to store. Bake directly from the freezer as above.

But one last  pumpkin post. Yes, it is technically after Thanksgiving and we are supposed to have moved on from said pumpkin. In my defense, I had these made long before Turkey Day, but in true holiday fashion, was just too darned busy to sit down and actually write. Somehow the week before Thanksgiving I had more commitments lined up than I cared for. Too often the holiday season blurs by us without being able to sit back and enjoy the finer things.

The previous post was all about pumpkin bread. That recipe made two loaves, which I would have gladly eaten every last bite, but really don’t have the budget to go out and buy all new clothes in the next size up. And, as previously mentioned, I was hosting a bunch of ladies for our November social. I was in charge of the bread and dessert, everyone else brought the soup. Since the week was already beyond busy, I needed something quick, easy, and tasty. Cute didn’t hurt either. Enter the Mini Pumpkin Trifle.

I’ve found that when you get a bunch of women together, they don’t eat much. Well, dessert anyhow. Even though you know that we all want to devour dessert. Or is that just me? If so, I’m ok with that. I like my dessert. But for this occasion I kept it small and easy to eat.

It started as just some pumpkin bread with a little whip cream on top. But no, I had to add more to my week. I thought it needed some color. What goes great with pumpkin? Cranberry sauce of course. But then I worried there was no texture. It needed a crunch. And what goes with cranberry and pumpkin? Ginger shortbread.  And that is my life, adding more to my schedule than I probably need to. But hey, that’s what women do best, right? Right.

And look at how cute they turned out! I’m not sure if I was more excited to eat the dessert or use the dishes. Complete with mini spoons!

While this dessert has four components, it doesn’t need all four, and each part is very easy and can be made ahead of time. The first is the pumpkin bread from the previous post. I kept one loaf out, froze the other and then thawed it out on the counter. Tasted just as fresh as day one.

The next part is cranberry sauce. This is the same cranberry sauce I use at Thanksgiving every year. I left out the cornstarch and instead smashed the cranberries which thickened the sauce. It can be made two days in advance. Maybe more but I’ve never tried!

I took a shortbread cookie from Martha Stewart. The recipe calls for cutting out the shortbread into shapes, and since I just wanted small slices of shortbread, I knew this would work great. I added ginger until the taste was right. 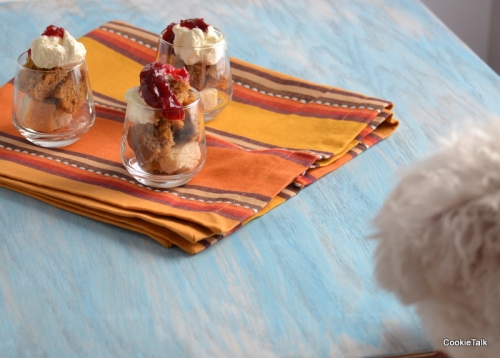 And the whip cream – insanely easy. I wanted to use Mascarpone, but had some cream cheese leftover from something (who knows what, that seems like an eternity ago!). Either would work great.

So there you have it. Four recipes all combined into one great little dessert. Assemble however you see fit. Since my dishes  were so tiny, I just did one layer of each, but if you have bigger bowls more layers would be great. I assembled several hours before my event and chilled. The less you need to do before guests arrive, the better.

Yield: Depends on your serving size. Will make around 20 small dishes.

Add all ingredients to pan and bring to boil. Reduce to simmer and smash cranberries. Sauce will thicken. Let cool and chill for later use.

*Note: the original recipe calls for cranberries in the cookie. You could probably skip the sauce and just make these cookies as is and it would still be great I’m sure. The ginger was very subtle, so if you like a stronger ginger taste, add more. Best if made at least one day in advance.

3.In a separate bowl whisk together the flour, salt, and ginger. Add to butter mixture and mix until dough ball forms. Press into prepared pan.

4. Bake until slightly golden on edges, about 20 minutes. Let cool and cut.

Using electric mixer, beat cream, mascarpone, sugar, and vanilla in large bowl until peaks form. Can be made a few hours ahead, but should be day of.