I’m still on a football kick, and what is more football than a big pretzel and a beer? Pretzels are surprisingly easy to make. They can be done in couple of hours tops, leaving you plenty of time to enjoy the festivities.

This recipe is from King Arthur Flour and requires a sourdough starter. However, since not everyone has sour dough starter, I’ll also include an alternate. It won’t taste like sourdough, but should still work. If you are buying from KAF sometime soon, throw the starter in your cart (along with some black cocoa). You’ll love it and it is easy to maintain. Very hard to kill. And believe me, I’ve tried numerous times. It makes great bread, which I’ll post on here eventually.

First, you gather all your ingredients in one big bowl. 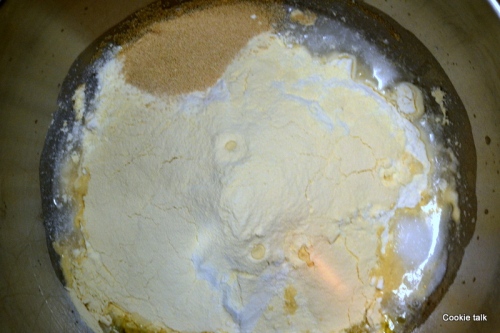 If you are using the mixer with a dough hook, mix until well combined on speed one, about five minutes. Using a spray bottle, spritz the dough periodically if it looks dry. You want the dough to be slightly sticky. I prefer to use a spray bottle to add water. It distributes evenly and keeps you from adding too much.

You can finish it in the mixer if you think your mixer can handle it. But I finished kneading it by hand, only took a minute or two. Knead until you have a smooth ball.

Let rest, covered, for about 45 minutes. It won’t rise much and will look like this: 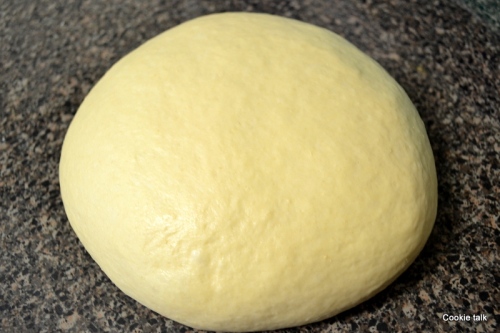 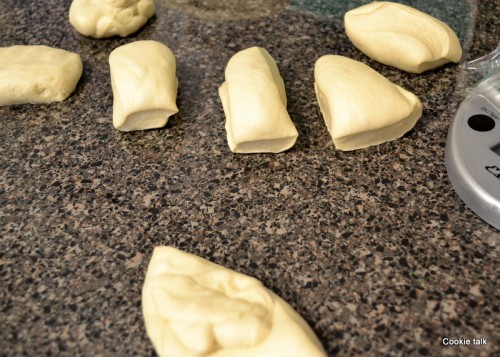 Flatten slightly and roll into ropes that are about 18 inches long.

The easiest way to roll is to roll as far as you can easily the first time. Let the rope rest and move on to the next one.  By the time you finish the initial rolling, the gluten in the dough will have relaxed on the first one and you will easily be able to roll to 18 inches. Don’t fight the dough. Dough can be temperamental and slow. Just let it be.

After rolling, shape into a pretzel first like this. Bring the ends together and twist twice. 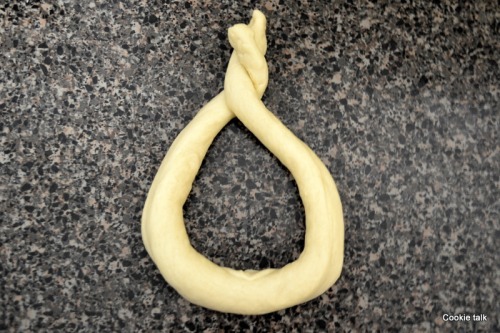 And then like this. Fold the twisted ends down to make a pretzel shape. Pinch down lightly.

Then prepare the baking soda soluntion. The KAF method doesn’t have you do this. I have done both with and without the boiling first and they turn out much better if you boil first. Bring about 3 quarts of water to boil and add about 2 tsp of baking soda (it doesn’t have to be exact).

Boil a couple at a time, don’t crowd them. Then place on sheet pan and sprinkle with coarse salt. The ones on the right have been boiled.

Then place into a preheated oven, 450F, for about 20 minutes, or until golden. If you want them really golden, brush egg wash on them. I did not do that. After they are done, brush on melted butter. 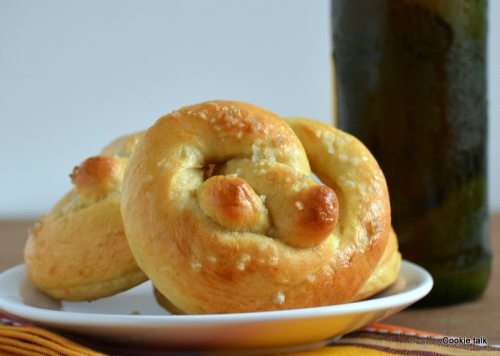 These are great dipped in honey mustard. I used this recipe from Alton Brown and added a couple tablespoons of mayo to thicken a bit. But they are also delicious without. You will be amazed at how easy it is to make your own pretzels.